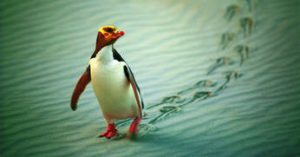 The yellow-eyed penguin or hoiho is another creature unique to New Zealand and also is the world’s rarest penguin. The Maori name hoiho means ‘noise shouter’ and is a reference to the penguin’s call. Penguins are only found in the Southern hemisphere,  and only 3 out of the 15 species of penguin breed in New Zealand – the Fiordland crested penguin, the little blue penguin, and the hoiho.

The yellow-eyed penguins (Megadyptes antipodes meaning ‘large southern diver’) have a life span of twenty years. The adults are about 65 centimetres tall and can weigh 5-8 kg. They are so named because of their very distinctive yellow iris and a band of yellow feathers around their heads.

When they reach maturity, they are a slate grey or greyish blue, with pink feet and a bright white belly. The male and female penguins have the same colouring. The chicks have brown fluffy feathers that are later shed when they are 3 ½ to 4 months old. The hoiho is also the only species of penguin that is a solitary breeder (other penguins breed all together in crowded colonies), does not become tame and is very shy.

These beautiful creatures are to be found on the south-east of the South Island (including the Otago Peninsula), Stewart Island and other islands off it, as well as the Auckland Islands and Campbell Island. Their habitat is both land and sea – they live on forest and scrubland, which can also be their nesting ground. Their marine habitat gives them a source of food. The penguins’ diet is small to medium-sized fish such as sprat, opal fish, squid and red cod.

There is currently only a population of six to seven thousand yellow-eyed penguins. Nest sites have been destroyed by forests being cut down, and by introduced predators such as dogs. Cats, ferrets and stoats often kill Hoiho chicks. The penguins are often drowned in nets at sea, or dwindling fish stocks are threatening their food supply.