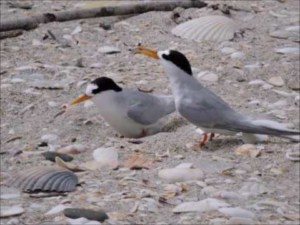 The New Zealand fairy tern is a seabird also known as the tara-iti. It is a critically endangered native bird, with the current population of only 36. This also includes a mere ten breeding pairs. In the 1980s there were only four breeding pairs and in 1999 the known population was only about 30 birds. Even at current levels it is New Zealand’s rarest breeding endemic bird. The bird’s Latin name is Sterna nereis davisae.

The tern is a very small bird with male adults only reaching 25 centimetres and weighing a paltry 70 grammes. On average, New Zealand fairy tern has a life span of six to seven years but has been known to survive up to 14 years.

As always, their major threats have been introduced predators – rats, dogs, hedgehogs and cats can be a threat to eggs, young terns and adult birds. Also storms, strong winds and even high tides can destroy the birds’ nests or make the adults desert their chicks. And human activities on beaches (both on car with four wheel drives and trail bikes, and on foot) are also a threat to the birds.

The fairy terns’ nests are built on low-lying shell covered sand on the beach which are hidden from predators. They are in just a shallow scrape in the ground but are camouflaged by sea shells. Parents will defend their young and nests against threats such as humans and other birds and predators, by calling, dive bombing and defecating! Young fairy tern chicks leave these nests after only 23 days.

In the 19th century the New Zealand fairy terns were to be found around the North Island coast and the east part of the South Island. However, now they are only in the lower half of the Northland Peninsula. Breeding grounds have only been monitored in four places - Waipu, Mangawhai, Parkiri and Papakanui Spit. Outside of breeding season, the birds usually congregate on Kaipara Harbour.

The fairy terns in New Zealand are mainly known to eat small fish. The bird’s appearance changes during mating season, becoming much brighter with black tops of their heads, white chests, orange legs and yellow beak. Outside of breeding season, the fairy tern is much more dull in appearance, with a faded black and white head and orange-brown beak and muted orange legs.

There is a Recovery Plan in place for these critically endangered birds. The population numbers have improved, possibly due to the introduction of wardens to monitor the breeding sites, and fencing off nests in order to protect them.