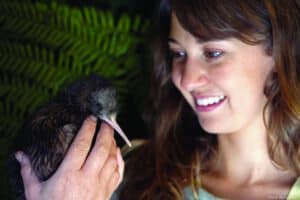 The kiwi bird is one of the best known New Zealand icons. Their name has given all New Zealanders and all things from New Zealand their distinctive nickname and identity: as anyone from that country will tell you, they are proud to be a kiwi. Incredibly it is a bird that cannot fly but is nocturnal, and its usual habitat a forest. The kiwi has remained unchanged for millions of years but despite appearances, it is not a mammal.

Kiwis are a ‘biological oddity’ having evolved through New Zealand’s geographical isolation and lack of predators, these factors have created this weird and wonderful bird.

The Latin name is Apteryx, meaning wingless. It has feathers which resemble hair, lays very large eggs, and has the curious characteristic of nostrils at the end of its beak. Its eggs are so large that they are on average 15% of a female bird’s body weight (compare that ratio to 2% for an ostrich!).

It doesn’t have a very good eyesight but has well-developed faculties for smell and touch. Its sense of smell is so acute that it finds its food by sniffing it out. Kiwis are omnivores, eating amongst other things, worms, seeds, berries, some types of leaves as well as well as some species known to eat fungus and even frogs.

So it is incredible that this wonderful national icon and native animal is in fact an endangered species. The name kiwi comes from the Maori name for the bird. The kiwi has been endangered since the introduction of mammals into New Zealand.

Pests such as dogs, cats, stoat, weasel and the Australian possum have all threatened the kiwi’s habitat and killed it and dwindled its numbers. Stoats and cats are particularly dangerous –they can kill up to 95% of kiwi chicks before they are six months old. Wild dogs and ferrets also kill a lot of kiwi adults as well as the ‘family cat or dog’.

Although the bird is a national symbol, no one quite knows how the nickname ‘kiwi’ came into use to denote all New Zealanders, both at home and abroad. One story is that it derives from a boot polish popular in World War I, used by US and British soldiers, and because it was called Kiwi (after the inventor’s New Zealand wife) that’s what the New Zealand soldiers came to be called.