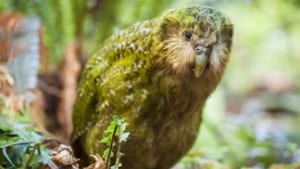 Stella the Kakapo. Retrieved from the Department of Conversation NZ

Another flightless bird, like the New Zealand icon the kiwi, the kakapo is the world’s most endangered bird. The kakapo is also unique to New Zealand.

It is a notable parrot for quite a few reasons: it is the world’s only flightless parrot. It is also the world’s only nocturnal parrot. It is also the world’s heaviest parrot, with males weighing up to whopping 4kg (females are typically sixty-five per cent of the male’s weight). Its Latin name is Strigops habroptilus and whilst it is a parrot it is not biologically that close to other parrot species. It is sometimes thought to physically resemble an owl with its feathers and circles around its eyes that look like fur.

It breeds very slowly and has a very long life expectancy. The kakapo can live up to an incredible 60 years old.  It has a peaceful and gentle disposition, but this may have been its undoing with introduced predators. Kakapo can be incredibly trusting and its population has dramatically decreased.

Now thanks to an incredible breeding programme in captivity which has brought the kakapo back from the brink of extinction, the population is finally in the hundreds. It is thought that its slow breeding rate or infertility may be due to inbreeding. For no female was found in the 20th century, making the species practically extinct, until 1980. Kakapo populations are now on offshore islands where they are not threatened by pests such as rats, stoats and.

Kakapos may not be able to fly but they can still get up trees and quite happily perch in the branches. Amazingly they are very good at climbing, and climb up the branches, using their very strong claws and beaks to hoist themselves up and using their wings for balance.

Kakapo once had a huge population throughout New Zealand, but by the time the European settlers arrived in the 19th century they had virtually disappeared from the North Island. They had been hunted by the Maori, and the European settlers also hunted the kakapo for food – and its trusting nature meant that it was happy to approach humans. Introduced dogs and kiore also decimated the population.

The major threat again has been introduced pests, and particularly the introduced stoat. Kakapos also have a very strong smell (like honey or flowers) which has made it very easy for predators to hunt them down this very unusual and rare bird.